When you get your first licensed firearm, the first thing that will pop up in your mind is a belt to carry it in. You can choose from several high-quality gun belts. People also look for regular belts at times to hold their firearms as a cheaper option.

You need to know this to find the right belt to carry your gun safely and comfortably. The main difference between a gun belt and a regular belt lies in its design, material quality, stiffness, and weight carrying capacity.

Usually, a concealed gun belt is made from a premium-grade material, especially leather, and enjoys increased stiffness to retain its shape. 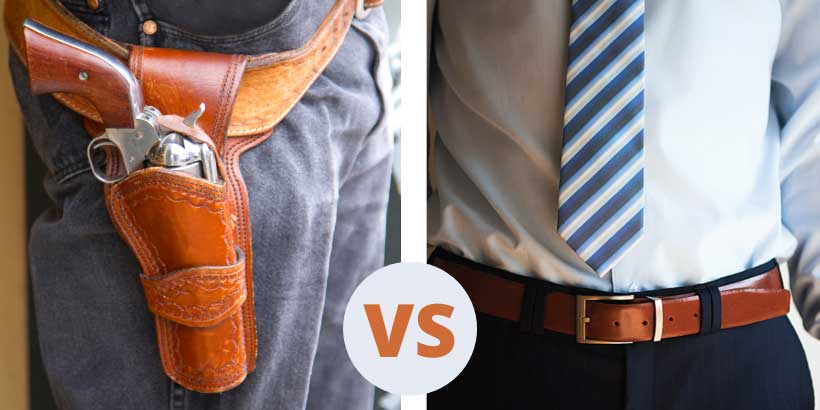 What’s The Difference Between A Gun Belt And A Regular Belt?

Most people will consider a belt as a combined piece of strap and buckles that holds their pants in their place for everyday use. But things change rapidly when it comes to holding a gun regularly in your holster around your waist.

You need to get the best belt to hold your handgun or pistols securely and comfortably. The belt must have enough strength to hold the gun on its holster safely. Also, it needs to be durable enough to be worthy of any investment.

These key points being mentioned, you should realize the difference between regular belts and gun belts to find the best bride for your gun (groom).

The difference in materials and stitching:

Although, at first glance, both gun belts and traditional belts may appear similar, their materials are quite different. The difference lies in its quality. Yes, traditional belts also use genuine leather or 100% full-grain leather.

But when it comes to leather gun belts, they leap up above everything with the best leathers available in the market. The belts often follow military-grade manufacturing quality to stop stretching and have UV and sunlight protection. A regular belt doesn’t have such quality, although it is also pretty durable.

As much as the material quality, the stitching quality of the belt also matters a lot. The stitches in a leather gun belt are done meticulously to avoid any wear and tear. Plus, gun belts often have dual layers of leather construction, which regular belts don’t have.

A standard belt consists of only a strap and buckle to securely hold it through the pants’ loop. Gun belt hardware promises maximum strength and integrity for comfy use. Dual-layer gun belts feature spring steel right between the two layers for a secure fit. But, regular belts lack it.

An average pistol weighs around 1.1 to 1.3 pounds when unloaded. A loaded gun weighs around 1.5 to 1.75 pounds generally. The gun belts are made purposefully to lift and carry this weight without stretching and wearing out quickly.

On the contrary, a regular dress belt carries less weight. So, gun belts are miles ahead when it comes to carrying capacity.

When you carry a gun in your belt, all you want is to hide it from the public so that no one stares at you. The gun belt, with its unique design, does the job perfectly. The gun belt keeps the holster in place and prevents slipping.

Also, the belt won’t slide down. But a regular belt won’t conceal your firearm and will slide down slowly, and you will have to adjust it now and then.

Gun belts are designed to carry extra magazines with your conceal. Since gun belts are made from military-grade materials, they are stiffer and permit you to carry the extra magazines easily. It is a great bonus for many people, especially those who work in law and enforcement organizations.

One of the most striking distinctions between a gun belt and a regular belt is in their pricing. Gun belts are more expensive than regular belts. You can expect to get a bonded leather ratchet belt for $20-$30 easily. Full-grain leather belts are gettable for around $50.

But a good-quality gun belt may easily go for over $100. So, no doubt, gun belts are costlier. However, this is reasonable since they use the highest-quality material, stitching and are more durable too.

Gun belts and regular belts are different, although they appear to be almost the same. Their design supports various applications, and so, their material, functionality, and durability vary significantly. Long story short, you must use a gun belt to carry your firearm and wear the standard belts with regular outfits when you don’t carry a firearm.